Lithium-ion batteries were first successfully developed by Sony Corporation of Japan in 1990. It embeds lithium ions into carbon (petroleum coke and graphite) to form a negative electrode (traditional lithium batteries use lithium or lithium alloy as the negative electrode). LixCoO2 is commonly used as the cathode material, and LixNiO2 and LixMnO4 are also used. The electrolyte uses LiPF6 + diethylene carbonate (EC) + dimethyl carbonate (DMC).

Petroleum coke and graphite are non-toxic as negative electrode materials, and the resources are sufficient. Lithium ions are embedded in carbon, which overcomes the high activity of lithium and solves the safety problems of traditional lithium batteries. The positive electrode LixCoO2 can reach the charging and discharging performance and life. The higher level reduces the cost, and in short, the overall performance of the lithium-ion battery is improved. It is expected that lithium-ion batteries will occupy a large market in the 21st century.
The reaction formula for charging and discharging lithium ion secondary batteries is LiCoO2+C=Li1-xCoO2+LixC

Rechargeable lithium-ion battery is the most widely used battery in modern digital products such as mobile phones and notebook computers, but it is more "squeaky" and cannot be overcharged or overdischarged during use (it will damage the battery or make it scrap). Therefore, there are protective components or protective circuits on the battery to prevent expensive battery damage. Lithium-ion battery charging requirements are very high. To ensure that the termination voltage accuracy is within ±1%, major semiconductor device manufacturers have developed a variety of lithium-ion battery charging ICs to ensure safe, reliable, and fast charging.

Mobile phones basically use lithium-ion batteries. Proper use of lithium-ion batteries is very important to extend battery life. It can be made according to the requirements of different electronic products
Flat rectangular, cylindrical, rectangular and button type, and there are battery packs composed of several batteries connected in series and parallel. The rated voltage of the lithium ion battery, because of the change of the material It is generally 3.7V, and 3.2V for lithium iron phosphate cathode. The final charging voltage when fully charged is generally 4.2V, and lithium iron phosphate 3.65V. Lithium-ion battery termination discharge the voltage is 2.75V～3.0V (the battery factory gives the operating voltage range or the termination discharge voltage, the parameters are slightly different, generally 3.0V, and phosphorus iron is 2.5V). Less than 2.5V (lithium iron phosphate 2.0V) continues to discharge is called overdischarge, overdischarge will damage the battery.

Lithium-ion battery charging is divided into two stages: first constant current charging, and changing to constant voltage charging when it is close to the termination voltage. For example, a battery with a capacity of 800mAh, whose termination voltage is 4.2V. The battery is charged with a constant current of 800mA (charging rate of 1C). At the beginning, the battery voltage is boosted with a larger slope. When the battery voltage is close to 4.2V, it is changed to 4.2V constant voltage charging., The current gradually drops, and the voltage changes little. When the charging current drops to 1/10-50C (various factory settings, it does not affect the use), it is considered to be nearly full and the charging can be terminated (with When the charger reaches 1/10C, ​​the timer will start, and the charging will end after a certain period of time).

Generally, the charging current of a lithium battery is set between 0.2C and 1C. The larger the current, the faster the charging, and the greater the heat generated by the battery. Moreover, the capacity is not full enough for charging with excessive current,because the electrochemical reaction inside the battery takes time. Just like pouring beer, pouring too fast will produce foam, but dissatisfaction.

Precautions for use (discharge)
For batteries, normal use is the process of discharging. Points to note when discharging lithium batteries:
First, the discharge current should not be too large. Excessive current will cause heat inside the battery, which may cause permanent damage. On the phone, this is no problem, you can not consider.

It can be seen from Figure 1 that the larger the battery discharge current, the smaller the discharge capacity and the faster the voltage drop. 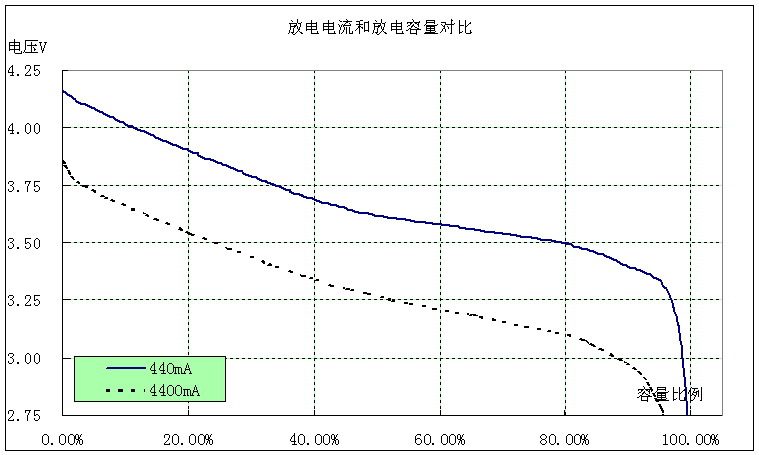 Second, it cannot be over-discharged. The internal storage of electric energy in lithium batteries is achieved by a reversible chemical change in electrochemistry. Excessive discharge will cause this chemical change to have an irreversible reaction.It should happen, so lithium batteries are most afraid of over-discharge. Once the discharge voltage is lower than 2.7V, the battery may be scrapped. Fortunately, a protection circuit has been installed inside the battery of the mobile phone, and the voltage It is not low enough to damage the battery, the protection circuit will work and stop discharging.

7. The advantages of lithium ion batteries

1) High voltage
The working voltage of single battery is as high as 3.7-3.8V (3.2V for lithium iron phosphate), which is 3 times that of Ni-Cd and Ni-MH batteries.

2) Greater than energy
The actual specific energy that can be achieved is about 555Wh/kg, that is, the material can reach a specific capacity above 150mAh/g (3-4 times Ni-Cd, 2-3 times Ni-MH), which is close to its theory.About 88% of the value.

4) Good safety performance
No pollution, no memory effect. As the predecessor of Li-ion, the lithium battery is short-circuited due to the easy formation of dendrites due to metal lithium, which reduces its application fields: Li-ion does not contain cadmium, lead, or mercury and other elements that pollute the environment; a major disadvantage of Ni-Cd batteries of some processes (such as sintered) is the "memory effect", which severely restricts the use of batteries, but Li-ion there is no such problem at all.

5) Small self-discharge
The self-discharge rate of fully charged Li-ion stored at room temperature for 1 month is about 2%, which is much lower than 25-30% of Ni-Cd and 30-35% of Ni-MH.

senescence
Unlike other rechargeable batteries, the capacity of lithium-ion batteries will slowly decline, which is related to the number of uses and temperature. This phenomenon of decline can be represented by a decrease in capacity,

It can also be expressed as an increase in internal resistance.
Because it is related to temperature, it is easier to reflect in electronic products with high working current. Replacing graphite with lithium titanate seems to extend life. Permanent loss of storage temperature and capacity

Recovery rate
Approximately 1% of new products leaving the factory need to be recycled for various reasons.
Intolerant of overcharging
When overcharged, the excessively inserted lithium ions will be permanently fixed in the crystal lattice and can no longer be released, which can result in a short battery life.
Intolerance of overdischarge
During over-discharge, the electrode deintercalates too much lithium ions, which can cause the crystal lattice to collapse and shorten the life.